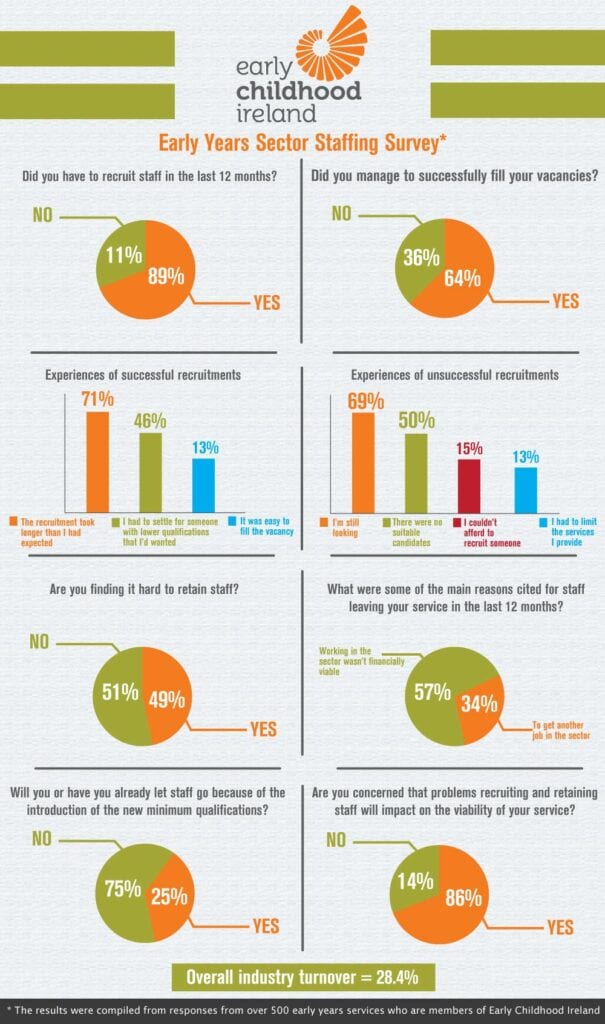 Problems recruiting and retaining well qualified staff to work in pre-schools and crèches is putting their survival at risk according to research published today by Early Childhood Ireland.

The research which was compiled of responses from 500 crèches, pre-schools and other early years facilities shows a sector that is struggling to survive due to the poor working conditions and low salaries afforded to staff.

Main findings of the research:

The research findings will be presented to Minister for Children and Youth Affairs, Dr Katherine Zappone TD, at Early Childhood Ireland’s annual conference which takes place, tomorrow, 1 April in UCD.

“Sadly, the findings of this survey are no great surprise. On a daily basis, I hear from owners of crèches and pre-school facilities of the challenges they face in finding and holding onto staff.

The low pay and uncertain working conditions of early years professionals mean that often, many simply can’t afford to keep working in the sector and are forced to seek alternative employment in other areas. This is a real shame, because early years professionals have a passion for working with young children and have earned qualifications up to and including degree level.

However, although parents in Ireland are paying the second highest rates of childcare in the OECD, service owners are not in a position to meet higher wage costs due to low levels of state investment.”

The average rate of pay for an early years educator working in Ireland is €10.27 per hour. Having a third level degree will earn you €1 extra per hour. According to the OECD, the average European family pays 17 per cent of household income on childcare. An Irish family pays an average of 34 percent. This is the second highest.

“While there has been some progress in addressing the historic levels of low state spending in the sector, more investment is needed in order to catch up with other developed nations.  If we are serious about providing a childcare sector that works for staff, parents and most importantly children, we need properly resource it.”

1.       Minimum Qualification: From 31 December 2016, as stated in the Child Care Act (Early Years Services) Regulations 2016, all staff working directly with children must hold a minimum of QQI Level 5 Major Award in Early Childhood Care and Education.

This regulation will not apply to persons working in the sector who signed the grandfathering clause, before 30 June 2016, that stated he or she intends to retire from employment in a pre-school service before 1 September 2021.

PrevPreviousMinister Zappone commits to carrying out independent review of cost of quality childcare
NextNew Guest Blog Post: The Arts as a CuriosityNext

On Monday, 13 June, the Economic and Social Research Institute published a report, commissioned by the Department of Social Protection,…
Read More
PrevPrevious
NextNext

On Monday, 13 June, the Economic and Social Research Institute published a report, commissioned by the Department of Social Protection,…
Read More