The ABC Club is sited in Dunboyne, an urban growing town in Meath, one mile from the Dublin border. The sessional playschool is in my garden and the main building is a prefab. From 1997 to 2012, the playschool garden and my home were one. A half-acre of grass surrounded and enclosed by a wall and conifer trees.

I was always an advocate for outdoor play, yet I knew the children were not getting the full value of the garden. We had ride-on toys, a swing and a slide, period! So, I began to look at and visit outdoor settings. I brought my team members along so we could explore, discuss, debate, and argue our observations on how things might work in our setting. One such place took me back to my childhood, Glen Outdoor School in Letterkenny. They have a tidal stream running through the middle of it in which the children could play. How lucky are they?

I grew up with a garden of an acre with Christmas trees on a slope down to the river which was at the bottom of the garden. Here, my five siblings and all the neighbourhood children gathered after school each day. We spent hours playing hide and seek, building dens, climbing, playing cops and robbers, school, and house. In the summer, we fished for pinkeens with jam jars, paddled and swam, made floats and raced paper boats in the river. We played outside in all weathers and all year around.

In April 2012, ten years ago, I had the opportunity to visit Trondheim in Norway as part of an Erasmus group from Early Childhood Ireland (ECI) for a few days. The snow was just melting, it was cold. Babies were sleeping outdoors, young children were sitting on logs around campfires, or exploring their surroundings …whether that was in service in the city or out in the forest schools. The children have dressed appropriately for the weather, the mud, snow, and water. It awakened the child in me and motivated me to reflect on my own childhood and on how I could bring those experiences back to the children of The ABC Club.

I began by sharing the photos of the trip with the team and recalling our own childhood experiences. We discussed how we could create a space that represented our childhoods or similar for the children. We consulted with the children about what they would like in the garden. We consulted Sally O’Donnell from The Glen Outdoor School, and Carol Duffy from Early Childhood Ireland. I consulted with my other half to see if I could halve the garden.

In the summer of 2012, we halved the garden, fencing in and separating the house from the playschool. The children wanted a treehouse with a slide and a ladder to the sky, so I was gifted one for my birthday. Along with some tractor tyres, which we dug into the ground, a gazebo, a recycled kitchen, some light blocks, a few planks and pipes our new garden was born. All the materials were sourced and gifted to us by parents and the community. Friends laid a patio area for the kitchen and thanks to Sally and Carol’s guidance, we kept the trees and cut the backs off them which exposed a “secret garden.”  Here we placed a tyre swing.

Just as nature does, our outdoor area too has evolved. We soon found that with the level of footfall, our grass turned to mud. We learned that Irish weather means the replacement of equipment if you do not source weather treated wood. We learned that we have fantastic tradespeople as parents who are only happy and willing to help. Parents and our community are our greatest suppliers of materials and/or resources. For example, we now have a pirate ship built and donated by a parent; flowers from the Tidy Towns, planted by the children, and a small building structure in the secret garden made by a student with the children. This is currently the jail (see below).

The biggest evolution has been our own attitudes towards outdoor play. We go outside every day in all weathers. While we do not have seamless provision, the children and team are outside for at least one hour every day. They have dressed appropriately and always have a change of clothes in their school bags for days that even the waterproofs cannot keep out the wet. We have found that the children are healthier, there are fewer arguments, and more connectedness.

The staff team are more engaged outdoors than they were in the bigger old garden space. They are closer to the activity, invited into more games, reliving their own childhoods, and having fun.

The children’s play is more focused, adventurous, and creative. Capturing and building on emergent interests appears to happen easier outdoors too. This week, we had a Garda (parent) in to arrest a team member because she “robbed the babies.”  This team member has been in jail since with a Wavin pipe trained on her (CCTV), a camouflaged “lookout” up a tree, and ropes threaded through the trees (lasers) so she will not escape. This game began two weeks before Easter break and resumed immediately on return. Nature play happens spontaneously in any garden.  A ladybird, snail, slug, or woodlice is found when a log is moved, a stone lifted. Last year, we had a beehive under the prefab, the children watched the bees move in and out, left picnics (flowers) close by for them and together we explored the importance of bees to the environment. Tidy towns supply us with pollinator bulbs to plant and the children love to watch them grow and the bees collect the pollen. Teachable moments happen all the time. Relational pedagogy happens all the time.

Our garden, while small, has everything to support learning and development opportunities and we are so glad we went from big to small. This is especially important for us now as increasingly green spaces are disappearing and children are being reared in apartment complexes with reduced opportunities to play outside, socialise, challenge their bodies, and learn about risk.  Children’s lives have changed since I was young but that does not mean they cannot have the same opportunities today. If you have a small space, I suggest you do not go buy fancy equipment, instead, have a look around with your team, invite your parents, the children, and the community to make suggestions and source materials. Take the next step and move outside. You won’t look back! 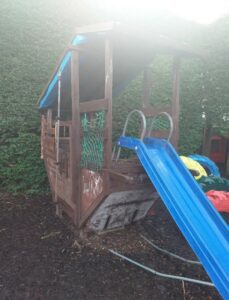 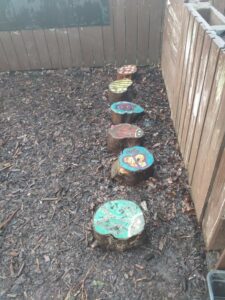 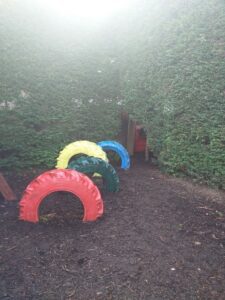 Statement in the Seanad by the Minister for Children, Equality, Disability, Integration and Youth

Apply for re-vetting now to avoid the September rush. Under re-registration, Tusla will be looking for evidence of your vetting.…
Read More

Statement in the Seanad by the Minister for Children, Equality, Disability, Integration and Youth

Apply for re-vetting now to avoid the September rush. Under re-registration, Tusla will be looking for evidence of your vetting.…
Read More